You are a work of art.

"Art, as I see it, is any human activity which doesn't grow out of either of our species' two basic instincts: survival and reproduction". 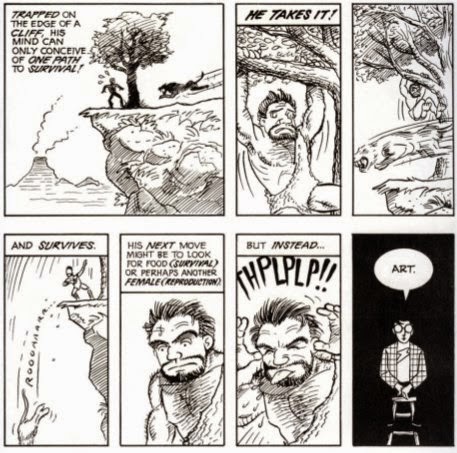 The masterpiece that is "Understanding Comics" had a huge effect on me when I read it as an undergraduate. Over the years I've revised Scott McCloud's definition of art to mean, that which has been created with no purpose other than to exist.

If you make a distinction between "art" and "craft" this definition becomes clearer. A craft is an activity directed toward a definite purpose. Unlike 'pure art' it is functional. For example, a great painter who has mastered his craft may manage to paint stunningly accurate pictures of the world. Yet, the more concerned the painter is with accuracy and documenting the image, the more they will find they are drawn toward purpose and function. They are involved in a more mechanistic activity.

This is why modern art exploded into action once the ultimate realism of the camera emerged onto the scene. Painters were forced to explore the less obviously practical side of their talents. They were inspired by an urge to communicate something else, other than raw practical information. They had to look within themselves for unique ideas. To give birth to something new rather than making a copy of the old.

This is why adverts are not art. They are too functional. They have a stated aim and are inspired by a desire to make money. An artist engaged in making an advert may add a level of art to what they are doing, random elements of fun that do not serve the overall message, but it is not the same thing. Art desires to be born for its own sake, not because it is required to sell something. Only once the passage of time has rendered an advert impractical can it start to be considered as art. Even then it's a stretch.

The less obvious meaning the above picture has the more it might be considered a work of art. It's dangerous to speak of the "true meaning" of a work of art. In doing so you reduce it into a work of propaganda, with a "message". A tawdry advert, but worse than that, an advert for politics. The meaning of a great work of art must be the work of art itself. It's absurd to abstract your interpretation of it and then act as if the artist simply couldn't think of the right words, like you just have with your "explanation". To give it meaning is to give it purpose and transmute it from golden art into leaden craft.

Machines will always out do a good craftsman, in terms of both quality and quantity. That's why handmade products are less common these days but also, I believe, one of the reasons people still buy them. A handmade table has a level of art to it, even if it's not covered in elaborate and ornate decorations. Its "imperfections" compared to a machine made product give it an ineffable quality that goes beyond a unique look. People who like that kind of thing are likely to like art*.

Recently on my podcast I have been musing about the above serving as an answer to the age old question, "why are we here?" . If you were created for a purpose you are going to feel like a machine. If you were just created, you might already have noticed. Whoever you are, as a fellow human, I greet you as what you are, you are a work of art.

As a great work is spontaneously inspired**, so are we thrown into the world after an equally irrational sexual impulse has had its way. From the chaos of conception we arrive, without clear meaning, purely for the sake of existence. Live your life like it were a work of art, is I guess one way you could go with this idea. Not sure, still working on it.

Thoughts in the comments section...

* And they've probably written better versions of this little article themselves. They are people with a remaining sense of the ineffable about them. Those who recall the fact that we do not understand the world and cannot measure some things in life. The ones who think that purpose and function are only part of the riddle of human existence. Who remember dreams and wonder.

Reality is optional to these people. They use "artistic license" to bend the rules of their lives. They occasionally ignore reality. However, the best of them never ever waver from the truth. They are artists. Discordians, Erisians.

** Inspired effectively means, inhaled. It used to be thought that God's essence was in the air and you drew it in with a deep breath.
Email Post

Anonymous said…
You're a work of art... and you're not finished yet.

Like a painting or a book. You are still being enjoyed.
12:18 am

Yellowbentine said…
Interesting idea. There is a wider epistemological and metaphysical question - "How can we know whether or not whether there is creator and whether or not that creator had a purpose for us?".
Unless we keep Scott Mcloud's "human activity" as part of the definition of art, we might have to include naturally occurring phenomena, which appear to serve no purpose - particularly if they please the senses. sometimes the sky can look so beautiful, for instance, that we are given to think of it as being artful.
Aristotle said that art completes what nature cannot finish. This seems to fit Mcloud's idea that human activity be involved.
does the 'artist' have to be human? What is painting done by a chimp? Or a song sung by a whale?
If 'purpose' is involved, at what point does this negate the creation being art? If an artist creates with the intention that they might get paid or that they might impress or irritate others - or even with the intention that they at least kill a little time whilst they are at it - doesn't this give a lie to the idea that what they have created/the activity they have been engaged in purely concerned with it's own existence. Nietchze similarly argued there was no such thing as altruism in that there must always be an ulterior psychological motive - even just wanting to act altruistically is serving a need to see oneself as altruistic. By this argument, perhaps true art could only be accidental - as any intention to create defeats the 'no purpose' criteria.

if a mother plans a child (as imagined by a Daily Mail reader perhaps) so that she can have more welfare benefits, does the resultant human being cease to be a work of art like the rest of us?

That's why I like your phrase "the chaos of conception". I like the idea that "art" is something "out there" that will happen whether we like it or not.
And I like the idea in the comment above that we are all still in a state of becoming - a work of art in progress. Perhaps we are catalysts for art to emerge into the world around us.
7:01 pm